Noozhawk is pleased to provide this free event calendar for the Santa Barbara community. To post events, visit Noozhawk Contribute.

Calendar questions can be emailed to calendar@noozhawk.com. 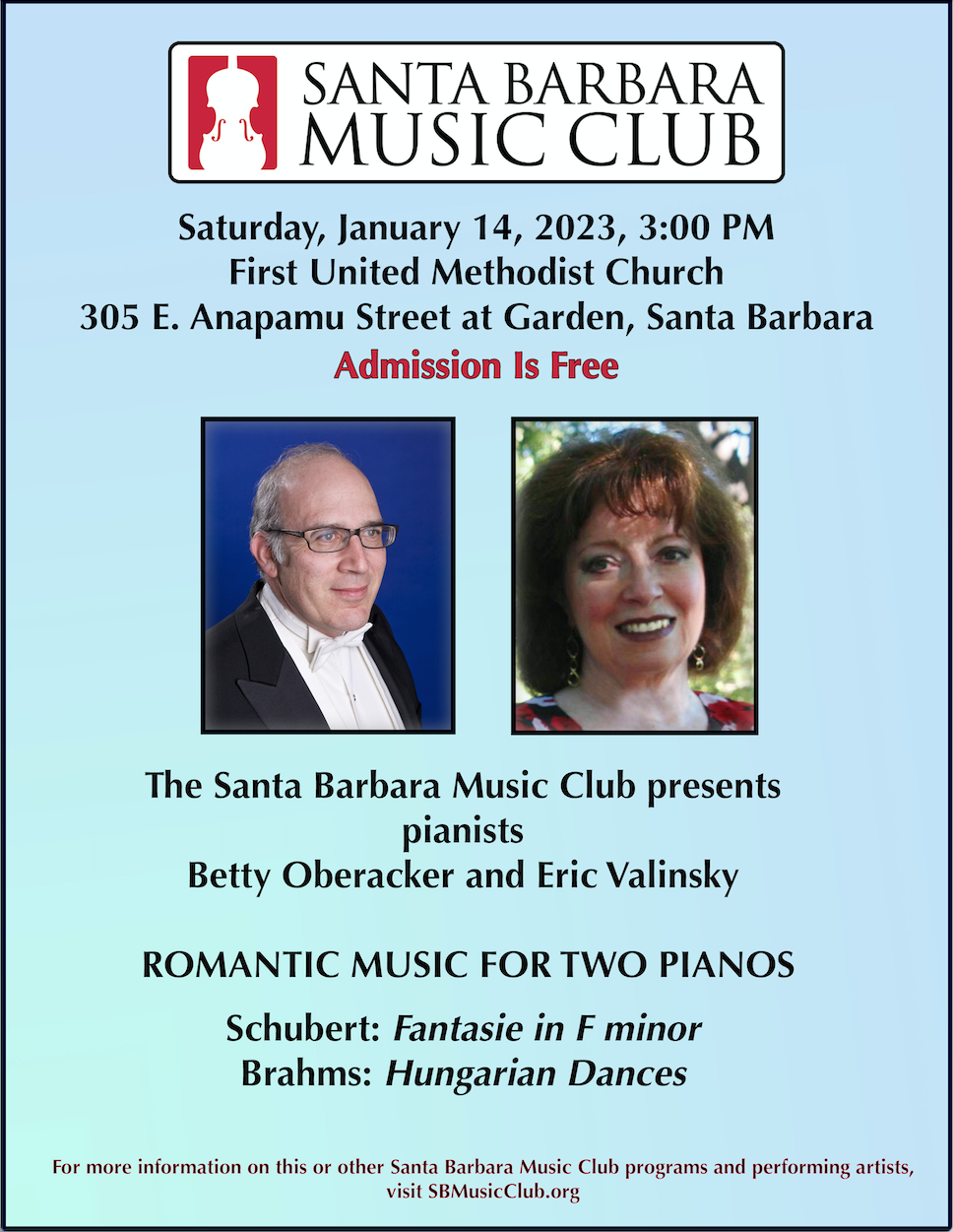 Pianists Betty Oberacker and Eric Valinsky will interpret two of the most beloved works from the Romantic Era, the Fantasie in F minor, D. 940 of Franz Schubert and the Hungarian Dances, WoO 1 of Johannes Brahms.

NOTES ON THE PROGRAM

There can be no other musical expressions of the Romantic Era that are more attractive and also more disparate than these two works, for they differ in virtually all aspects of their essence: the Schubert Fantasie is intimate, poignant, and exquisitely tender, with long melodic lines of incredible sensitivity, whereas the Brahms Hungarian Dances are exhilarating, even rambunctious, and forthrightly flamboyant with their proud peasant-inspired rhythmic vigor. Yet all these differences notwithstanding, both compositions are replete with tremendous beauty and fascination, each compelling in its own way.

The Fantasie in F minor by Franz Schubert is one of his most important works. Composed in the last year of his life, it has been described as “among not only his greatest but his most original compositions.” He wrote it in 1828 in Vienna, and it was dedicated to Countess Caroline Esterhazy, a Hungarian noblewoman with whom he was in (unrequited) love. The work is divided into four movements, interconnected and played without pause.

The Hungarian Dances of Johannes Brahms were inspired by a very early event in the composer’s life: it was 1850 and Brahms was 17 years old and living with his family in Hamburg, when the violinist and political refugee from Hungary Eduard Reményi came to the city, performing what he described as gypsy folk music. Brahms was so taken by the exotic character of the music, as well as its sensational reception by the public, that Reményi and the teenage Brahms began playing together, eventually taking the wildly popular alla Zingarese (in the gypsy style) music on tour. It was the start of the composer’s lifelong infatuation with the so-called Hungarian style.

Brahms took much delight in the interpretational freedom of performing improvised versions of this music, and, though at first reluctant to write his dances down, he eventually agreed to do so and send them to his publisher — having first performed them in the original two-piano version in a concert with Clara Schumann before sending them off.

Betty Oberacker, pianist, is renowned for her interpretations of both traditional and contemporary repertoire and has toured throughout Europe, Israel, Asia, Australia, New Zealand, Mexico and the U.S. She has been Artist-in-Residence at 55 universities, conservatories and music festivals worldwide.

Rome’s Corriere della Sera hailed her as “An artist of the highest order! Her playing, imbued with an intense lyricism yet fervent and impassioned, earned for her a glowing success,” and Berlin’s Der Spiegel observed, “She performs with profound comprehension of the music’s essence and with intuitive certainty of its effect, with conquering energy and sensuously sonorous interpretations.”

Her musical gifts were evidenced at age three, when she began to play the piano and improvise entirely by ear. Piano and theory lessons started at seven, and at nine she was accepted as the only child student of the noted pianist and composer Beryl Rubinstein. A Fulbright scholar, she earned her Doctorate Degree from The Ohio State University while concurrently a member of the piano faculty. UCSB Professor Emeritus, Dr. Oberacker enjoys an active performing, teaching and chamber music coaching schedule and is currently Chair of the Santa Barbara Music Club Concert Committee.

Eric Valinsky, composer and pianist, is a native Manhattanite who has, for more years than he would like to admit, maintained dual careers in music and computer systems architecture. He was educated at the Oberlin Conservatory of Music and the University of Illinois, achieving his DMA in Music Composition from Columbia University. He studied composition with Walter Aschaffenburg, Jack Beeson, Salvatore Martirano, and Darius Milhaud; piano with Sara Crawford Drogheo and Emil Danenberg; and conducting with Harold Farberman.

While living in Los Angeles he became Music Director and Composer-in-Residence for The Storie-Crawford Dance Theatre Ensemble, and upon returning to New York he served in a similar capacity for Danny Buraczeski’s Jazzdance, Uris Bahr and Dancers, and The New American Ballet Ensemble as well as Composer-in-Residence for The Rachel Harms Dance Company, Opera Uptown, and the Dance Department at City College of New York, among others.

Of the series, the Santa Barbara Independent exclaimed: “A beautiful day, a beautiful room, beautiful music … who could ask for more?” and Gerald Carpenter in Noozhawk.com declared, “Every Santa Barbara Music Club concert that I have ever attended has been a sensory joy as well as a consciousness expansion.”

A valued cultural resource in the community since 1969, the Music Club’s mission is threefold:

(1) Presentation of an annual series of concerts, free to the public.

(2) Aiding and encouraging musical education by the disbursement of scholarships to talented local music students.

For information on this or other Santa Barbara Music Club programs and performing artists, visit SBMusicClub.org.

For the health and safety of our audience and performers:

Masks are required and must cover both nose and mouth. Social distancing is required.