Evacuations were ordered and Highway 101 was closed in both directions Monday due to a wind-whipped vegetation fire that had charred thousands of acres along the Gaviota Coast and in the Santa Ynez Mountains.

As of midnight, what has been dubbed the Alisal Fire had blackened an estimated 3,900 acres, with 0% containment, according to Capt. Nikki Stevens of the Santa Barbara County Fire Department.

No injuries were reported.

The area of greatest concern, Stevens said, is Refugio Canyon, which has a lot of vegetation in the upper reaches that hasn't burned in decades, along with a number of structures.

She added that the burn scar from “the Sherpa Fiire of 2016 is going to give us a good buffer from the fire continuing to go to the east.” 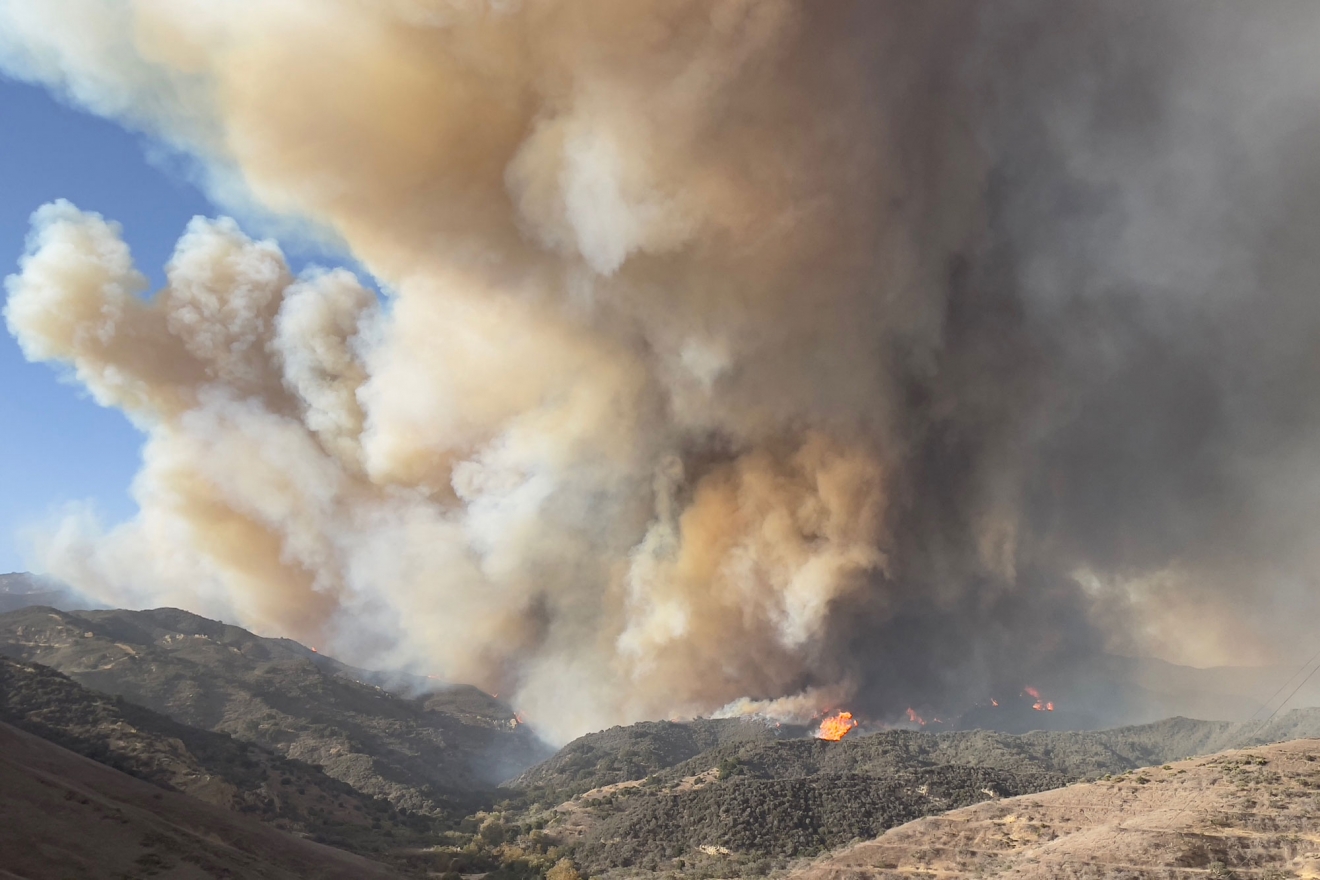 Highway 101 was closed between Highway 1, north of the Gaviota Tunnel, and Winchester Canyon Road in the western Goleta Valley, and Caltrans said there was no estimate of when it would reopen.

One structure near Calle Real was destroyed by the flames, Stevens said.

Just before 5:30 p.m., firefighters reported extreme fire behavior as the flames had reached Highway 101 and jumped across the freeway to the southern side, near the ocean.

The fire broke out shortly before 2 p.m., and personnel from several Santa Barbara County Fire Department stations, along with Los Padres National Forest crews, were dispatched to the fire due north of Tajiguas Canyon, between Alisal and Refugio roads.

The Santa Barbara County Sheriff’s Department issued evacuation orders for the area of Arroyo Hondo Canyon and Refugio Canyon west of Goleta, and Refugio State Beach, according to the Office of Emergency Management. Everyone in the affected areas was asked to leave immediately. 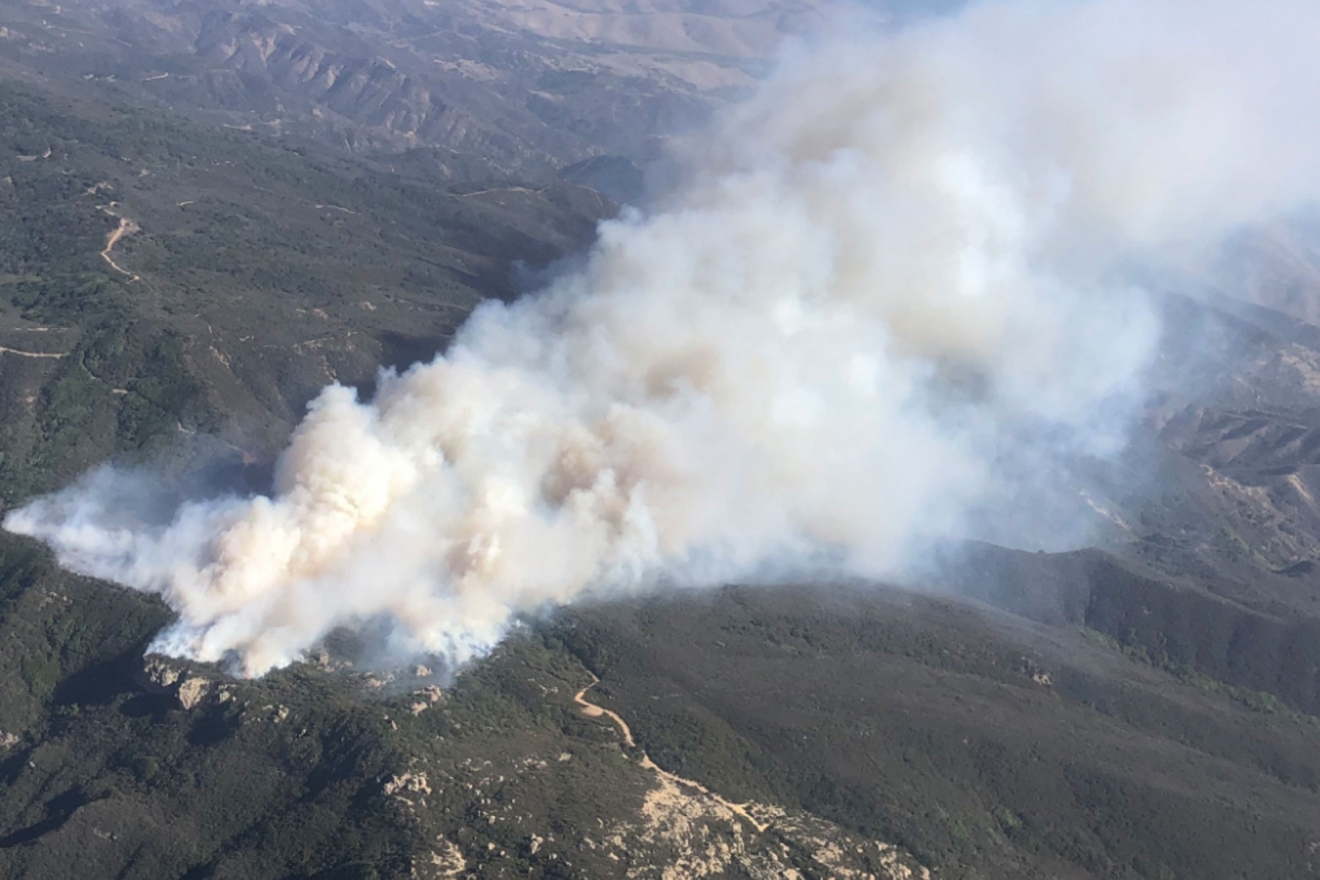 Firefighters were responding to a vegetation fire burning on a ridge above the Santa Ynez Valley on Monday afternoon. The fire reportedly is between Alisal and Refugio roads. (Calfire photo)

Later Monday, evacuation orders were issued for El Capitan State Park and the El Capitan Campground, with an evacuation warning for the area north of the campground and east to Dos Pueblos Canyon.

A temporary evacuation point was established at the Dos Pueblos High School, 7266 Alameda Ave. in Goleta, and late Monday night it was transitioned to an evacuation center.

As they initially responded to the hard-to-reach incident, crews struggled to access the wildfire — which started near the Reagan Rancho del Cielo — from Refugio Road on the South Coast or from Alisal in the Santa Ynez Valley.

Early on, the fire had a fast rate of spread, and was burning mainly in Los Padres National Forest.

Officials said they expected to have a better estimate of the area burned by Tuesday morning.

Some 100 structures were threatened by the blaze as the firefighting force had grown to 125 as additional personnel arrived into Monday night.

By early evening, flames had burned into the upper reaches of the Baron Ranch and Arroyo Quemada, and were moving into Tajiguas Canyon, site of a regional landfill.

Firefighting crews also were assigned to protect structures at the landfill as flames advanced. 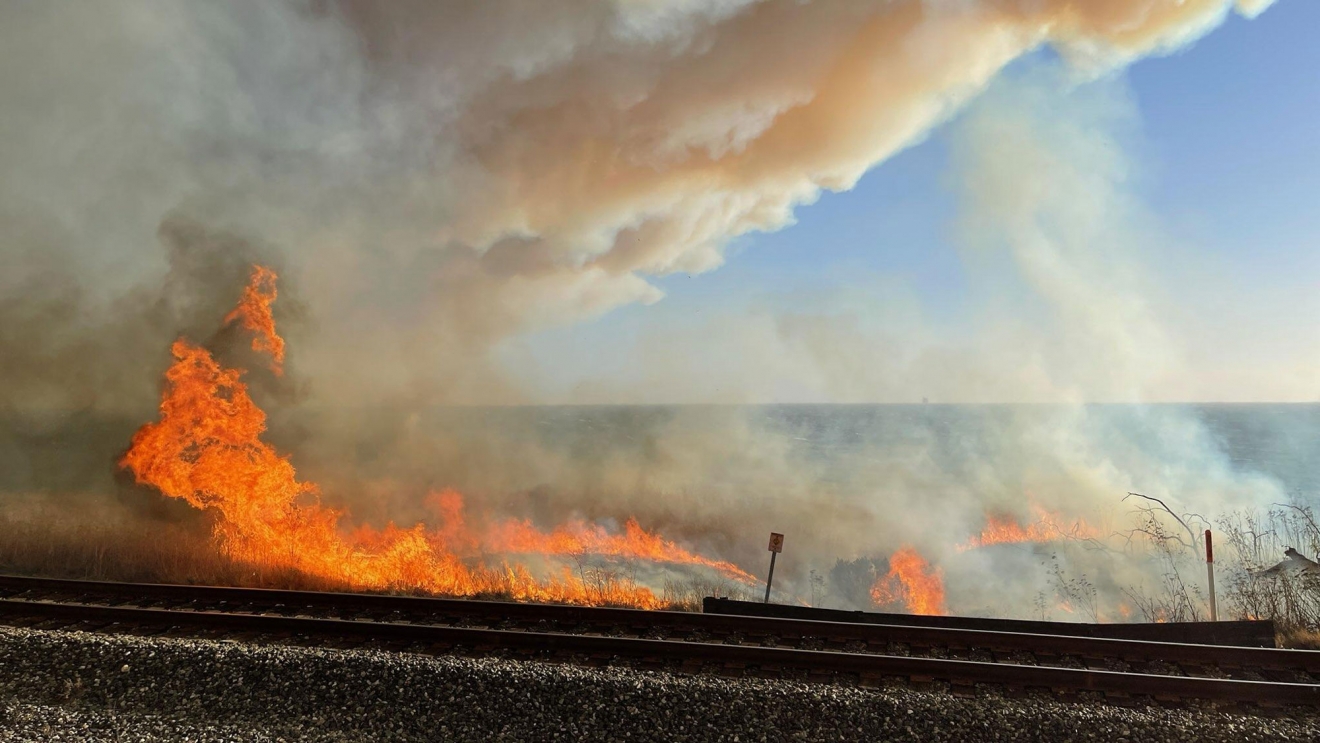 A big-rig crashed in heavy smoke and burned along Highway 101, but the driver reportedly was taken to a local hospital by an off-duty firefighter.

The fire broke out as windy and gusty conditions were blowing through Santa Barbara County . Winds from the northwest were blowing at 20 to 30 mph with higher gusts, and gusts up to 60 mph were forecast for Monday afternoon and evening.

“Winds up there obviously are the biggest concern both because they could ground the tankers and push that fire,” said Andrew Madsen, spokesman for the Los Padres National Forest.

The incident command post for the wildfire was established near Refugio State Beach, but officials planned to relocate it to El Capitan. 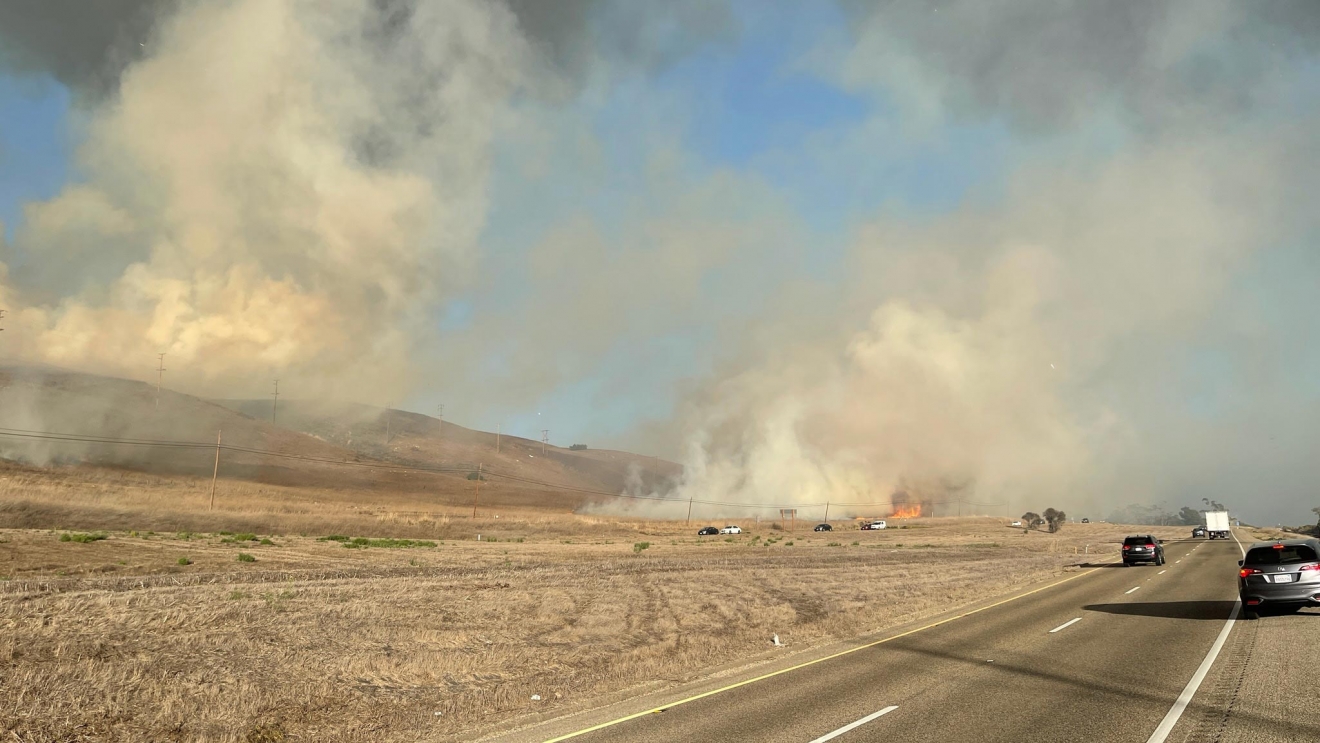 Flames from the Alisal Fire approach and cross Highway 101 on the Gaviota Coast, leading to a full closure in the area.  (Ray Ford / Noozhawk photo)

Five air tankers, helicopters and air attack were dispatched to assist firefighters on the ground, but turbulence above the fire led to the early release of aircraft still fully loaded with retardant, according to emergency traffic.

Crews from other local fire agencies — including the city of Santa Barbara and the Montecito Fire Protection District — also were dispatched to the fire.

While large blazes have occurred nearby in, the area burning Monday doesn't have a lot of fire history over the past six decades, Madsen said.

“There's definitely a lot of dry fuels that are found in this area,” Madsen added. 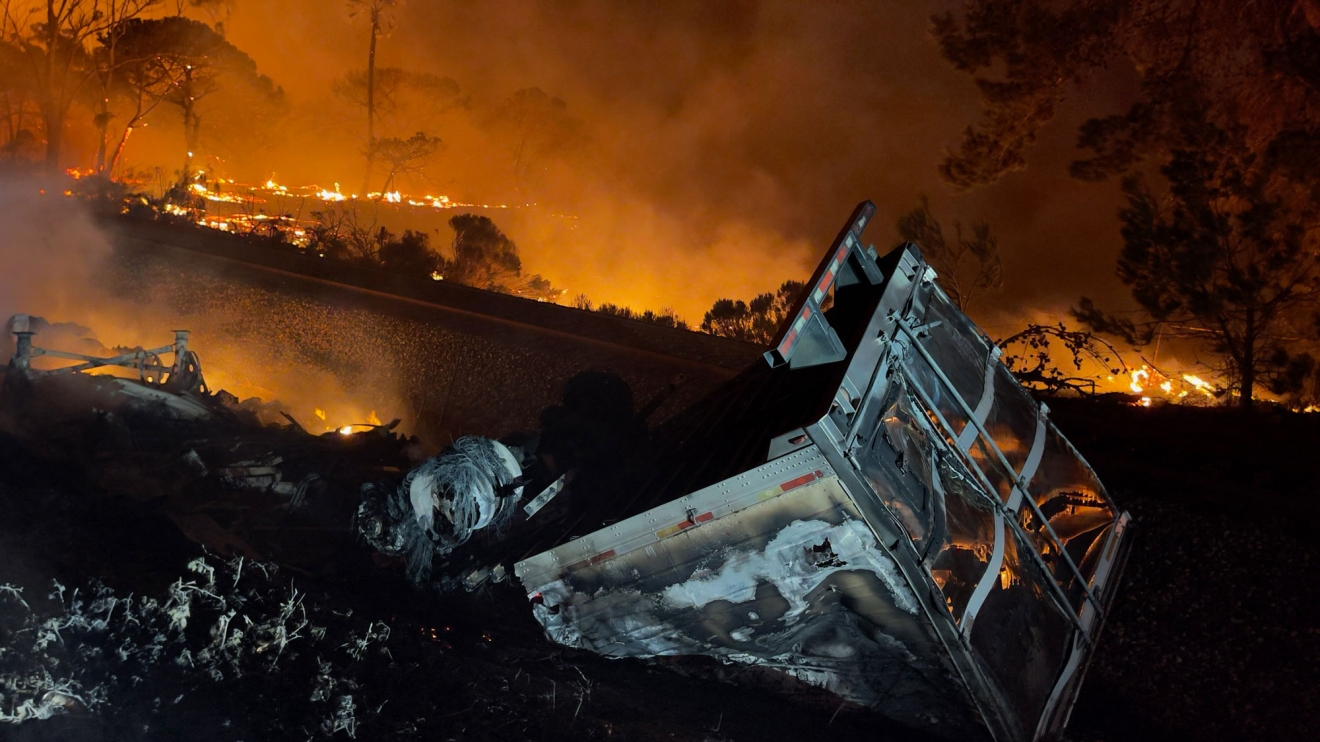 A big-rig crashed and burned Monday afternoon as heavy smoke blanketed Highway 101 along the Gaviota Coast. The driver reportedly was taken to a local hospital. (Ray Ford / Noozhawk photo)

The cause of the fire remained under investigation on Monday.

Northwest winds were gusting to around 40 mph Monday afternoon, with humidity around 30% and temperatures around 65, according to the National Weather Service, which issued a forecast specifically for the Alisal Fire area.

Strong sundowner winds were forecast for Monday evening, with the strongest gusts expected through canyons and over hills, the NWS reported.

Stevens told Noozhawk that the winds had diminished somewhat by 9 p.m.

Winds were expected to weaken through Tuesday night before picking up again Wednesday, according to the NWS.

Air tankers and helicopters were on order for first light, Stevens said, adding that fire officials hoped the combination of an air attack plus engines, bulldozers and handcrews on the ground would lead to progress in containing the fire.

Check back with Noozhawk for updates to this story.

Click here for more information about checking air quality during wildfires and creating a clean air room in your home. 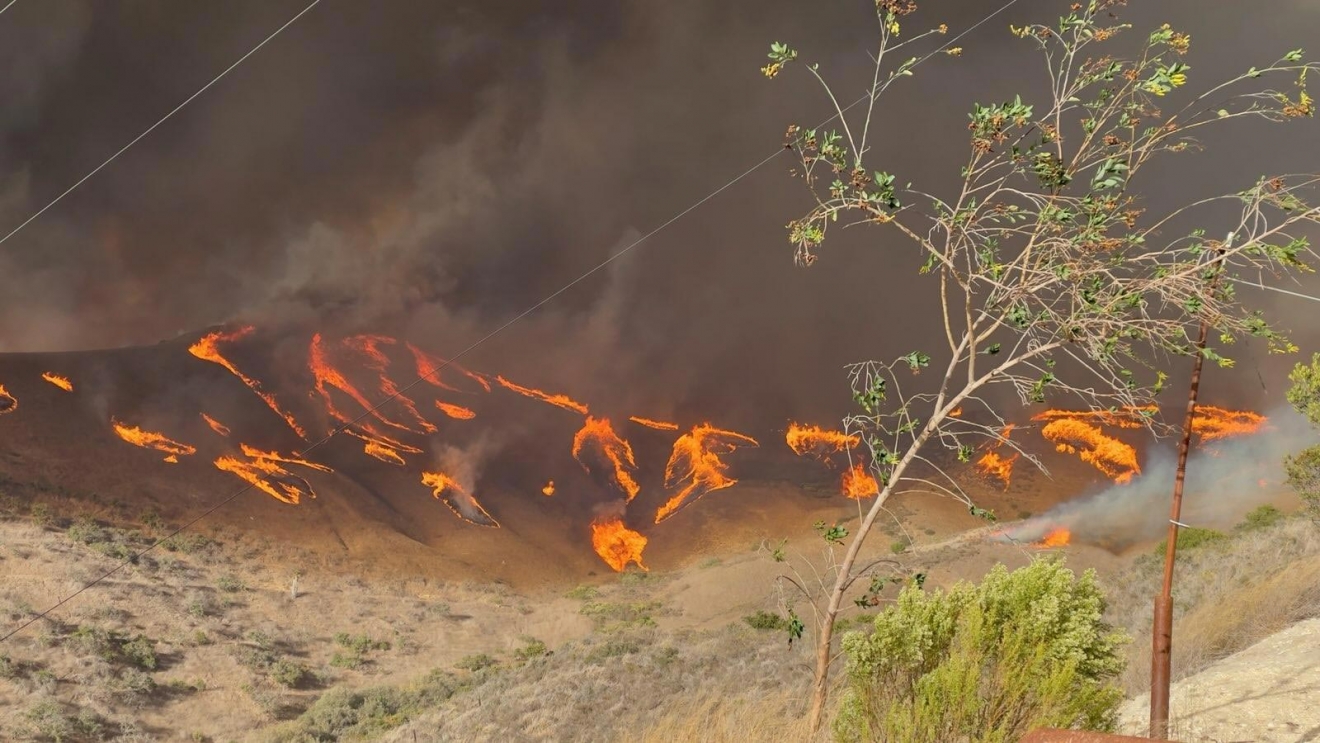 Resources for the Alisal Fire in Southern Santa Barbara County