Attendees made it clear that “mothers and others” have had enough of the horrific gun violence in America during a rally organized by the Santa Barbara chapter of Moms Demand Action, the grassroots arm of Everytown for Gun Safety.

The demonstration near City Hall coincided with the national Moms Demand Action campaign. The group hosted more than 100 rallies this weekend in all 50 states to honor victims of gun violence and to demand that senators return early from recess to expand on gun background-check laws and “strong red flag legislation,” which would limit some people from obtaining firearms if they are deemed a danger.

Local mother and activist Emily Engel, co-founder of the Moms Demand Action Santa Barbara chapter, was one of those calling for change. She spoke into a microphone while encircled by supporters wearing matching red T-shirts and people holding signs that read, “Protect people not guns” and “Fear has no place in our schools.”

“We are gathered because we have had enough,” Engel told the crowd of nearly 300 people. “We call on our federal officials to take action to make our communities safer.”

Every day, 100 Americans are killed with guns and hundreds more are wounded, according to Engel. The impacts of gun violence extend beyond these fatalities, she said, adding that mass shootings across the nation have resulted in devastating community losses.

“We are gathering to make our voices heard,” Engel said. “We are here to demand the U.S. Senate take action now.”

Santa Barbara County and Santa Barbara City Council elected officials, a representative with Democratic U.S. Rep. Salud Carbajal’s office, an interfaith minister, a member of the Coalition Against Gun Violence, local school board members and others took turns speaking at the rally.

U.S. lawmakers need to “stop being afraid of the National Rifle Association and start acting on behalf of the people,” Jackson said. 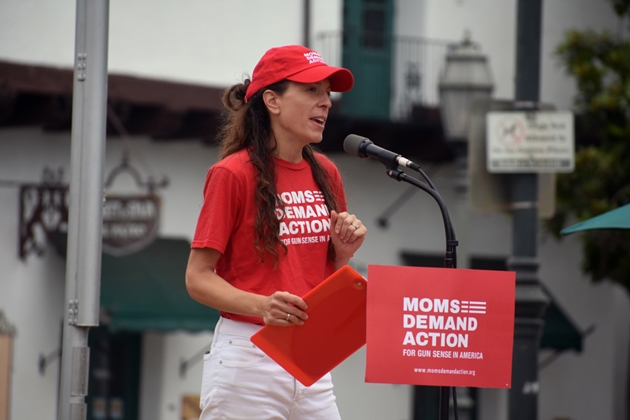 “Pass California’s gun legislation and you will see a safer, kinder, more productive world so that we, and our families, our children and the generation to follow will be again proud of this country,” she said. “It's time to act.”

Assemblywoman Monique Limón, D-Santa Barbara, served as a board member for the Santa Barbara Unified School District when a mass shooting at Sandy Hook Elementary School in Newtown, Conn., occurred in 2012. She was first elected to the Assembly seat in 2016.

Many citizens believed that the massacre of children and adult staff members at Sandy Hook would change the nation’s gun-control debate. But, Limón said, public mass shootings are occurring more frequently.

“You can’t shop at a convenience store, can’t go into a movie theater, a synagogue, a church and a community center without thinking, ‘Is something going to happen?'” she said. “We have to ensure we keep guns out of the hands of individuals that are using them to harm.”

The rallies come after two mass shootings in less than 24 hours killed at least 31 people and injured dozens more in El Paso, Texas, and Dayton, Ohio. The gunman at a mass shooting at a Walmart in El Paso allegedly targeted the Hispanic and Mexican community. Investigators believe that the shooter posted an online manifesto rallying against a perceived “invasion” of Hispanics coming into the United States.

“As a Latina,” Limón said, “as I saw what happened in El Paso, the concern grows even more when we have individuals that because of their faith, background and ethnicity are being targeted in waves. The intersection between safety and racism is real, folks. This is a scary time we are living in our community.”

Santa Barbara Mayor Cathy Murillo said she joins more than 260 U.S. mayors urging the Senate to vote on two background check bills — H.R. 1112 and H.R. 8. The Democratic-led U.S. House of Representatives passed both gun-safety laws in February. The Senate has yet to vote on them.

“Once we start down the path of violence,” Murillo said, “where does it stop?”

Firearms are the second-leading cause of death of children in the United States, said Laura Capps, a Santa Barbara Unified School District trustee whose parents both served in Congress.

Capps said that residents gathered in Santa Barbara for their children. Kids often attend school worrying about unfathomable scenarios, she said, and students and educators are putting their lives on the frontlines of school shootings.

Education leaders in Santa Barbara are working “to make our schools safe as can be — with fortified school safety plans, a school safety task force with national experts and a new school safety coordinator at the helm,” Capps said.

She urged people to get involved and ask about each school’s plan.

A study found that about 4.6 million American children live in homes with guns that are both loaded and unlocked, Capps said.