The 36th annual Taste of the Town, one of Santa Barbara’s premium culinary events, got an early start with the Sept. 8 Connoisseurs Circle Gala Dinner at lovely Bacara Resort & Spa in Goleta. Then, on Sept. 10, Taste of the Town took place for three hours at Riviera Park in Santa Barbara.

Taste of the Town featured tastings from local restaurants, vintners, breweries and distillers with a backdrop of live jazz entertainment. All proceeds from Taste of the Town Santa Barbara events support the programs and services of the Arthritis Foundation.

The foundation is the only nonprofit organization dedicated to improving the lives of 53 million people — including nearly 300,000 children — with arthritis through health education, advocacy, research and local juvenile arthritis support. More than 50,000 Santa Barbara County residents and children have been diagnosed with one of the 100-plus forms of arthritis, and many are helped by the Arthritis Foundation.

For the eighth year, Taste of the Town kicked off with the Connoisseurs Circle Gala Dinner, which featured a four-course, Italian-inspired gourmet dinner created by 2017 honorary lead chef Mark Strausman from Freds at Barneys New York. Strausman paired the wines with help from 2017 honorary vintner Doug Margerum.

The pre-dinner reception allowed the 200-plus guests to sample tastings from 10 wine, beer and spirits partners on the outdoor terrace and foyer.

In addition to an outstanding meal, the evening featured live and silent auctions, performances by vocalist Rebecca Clarke, and dancing to tunes from DJ Darla Bea.

“The Connoisseurs Circle Gala Dinner was started eight years ago,”​ Leong told Noozhawk. “It provides a high-level culinary experience for a special group of our supporters. We are very happy tonight to be honoring the legacy of the late Michael Towbes and the Towbes family.

“What began as a simple gesture of support 36 years ago, when Mr. Towbes offered Riviera Park as a site to host a community tasting event, grew into one of Santa Barbara's largest events and raised so much financial support for the Arthritis Foundation. We are very grateful.” 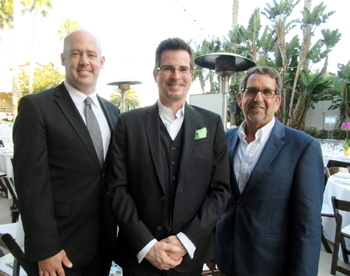 Guest auctioneer Mark Drilling worked to secure bids on live auction items, including a week in Bangtao Beach, Phuket; earrings by Daniel Gibbings Jewelry; a French river cruise; and a tour and lunch at the Margerum Estate Vineyard in Los Olivos.

In addition, recognition was awarded to youth honoree Lilly Trautwein, a 7-year-old juvenile arthritis victim from Santa Barbara who was diagnosed at age 2, and medical honoree Dr. James Zmolek, an orthopedic surgeon at Sansum Clinic and the Cottage Center for Orthopedics.

Zmolek has dedicated his career to orthopedics and helping those with arthritis.

“It’s my job to get people going, whether they can walk two or three blocks or two or three miles,” he told Noozhawk. “There are many new discoveries in surgery and rehab that help patients get moving again.”

Zmolek graduated from UCLA medical school and did fellowship work specializing in surgical arthritis and reconstruction at Rancho Los Amigos medical center in Los Angeles. Known as “Dr. Zee,” he has served as an adviser to the Arthritis Foundation for many years.

Leading the fight for the arthritis community, the foundation helps conquer everyday battles through life-changing information and resources, access to optimal care, and advancements.

Click here for more information about the Arthritis Foundation.

— Noozhawk contributing writer Rochelle Rose can be reached at rrose@noozhawk.com. Follow Noozhawk on Twitter: @noozhawk, @NoozhawkSociety, @NoozhawkNews and @NoozhawkBiz. Become a fan of Noozhawk on Facebook.

Laurie Jervis: Taste of the Town Raises More Than $180,000 for Arthritis Foundation of Santa Barbara