Montecito residents and visitors will need to make some long-term detours to avoid condemned bridges that could take months to repair or replace.

Caltrans, the state agency responsible for Highway 192, and the Santa Barbara County Public Works Department, which oversees local roads in the area, have long-term closures for several bridges and one-way traffic control for others that were damaged in the Jan. 9 mudslides and debris flows.

Click here or scroll down to view a map of the bridge closures.

The county lifted the last mandatory evacuation orders for the Montecito area over the weekend, and people are returning to their homes and businesses.

Highway 192 is still closed between Sycamore Canyon Road, near Santa Barbara, and Torito Road, near Toro Canyon, and there is no estimate for when it will reopen, according to Caltrans.

Debris-hauling trucks and utility vehicles have been using portions of the roadway as a thoroughfare for several weeks, and Caltrans said that “most sections” will be open to motorists as people return to Montecito.

There are three Highway 192/East Valley Road bridges that will be completely replaced, so they are closed to through traffic (except emergency and utility vehicles) until further notice, Caltrans District 5 spokesman Jim Shivers said Monday.

The long-term plan is to completely close each bridge with barricades and locked gates, according to Caltrans. 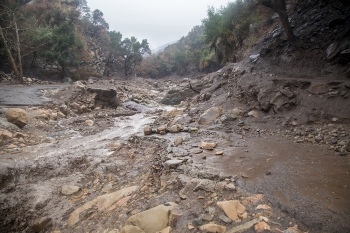 Other bridges have one-way traffic control with stop signs, including the San Ysidro Creek bridge at East Valley and Randall roads; Toro Creek (near Ladera Lane); and Arroyo Parida Creek near Carpinteria.

The Arroyo Parida crossing has had one-way traffic control for a while, and was already slated to be replaced, Shivers said.

There are temporary bridge guardrails on the San Ysidro and Toro creek bridges, according to Caltrans, since railings were knocked away by the force of the rocks, mud and debris during the storm.

Santa Barbara County has two damaged bridges – one is gone, and one is closed – and a destroyed creek crossing on East Mountain Drive.

The bridge on East Mountain Drive near San Ysidro Ranch is completely gone, and the Ashley Road bridge is closed after being severely damaged in the storm, Wageneck said. 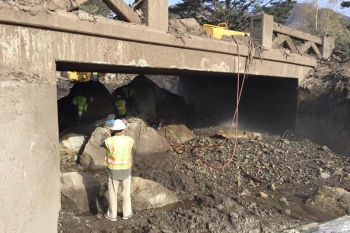 Replacing the crossings will take a long time, according to Public Works.

The first step is to have the Federal Emergency Management Administration assess each site since they are within a federally declared disaster area, and that alone could take months, Wageneck noted.

Then comes the design, permitting and construction process.

“They need to see, at Cold Spring for example, the low-water crossing, is that still feasible or is that a section where we need to put a bridge?” he said.

Noozhawk managing editor Giana Magnoli can be reached at gmagnoli@noozhawk.com.