Booth, a recent graduate of Dos Pueblos High, won the Under-19 Ironman title and took top honors in the U19 Run Swim Run and Board Race and was a member of the first-place U19 Rescue Relay. His teammates were Andrea Bish, Brittney Gamble and Jake Ballantine.

Booth, who along with Bish are headed to the U.S. Nationals in Virginia Beach, also placed well in Men’s Open Division events, competing against top lifeguards from throughout the state. He took second place in the Open Ironman and the Board Race, and placed fourth in the Surf Race, Board Rescue and Taplin Relay. The relay team consisted of Greg Robinson, Miles Gaitan and Jack McKenna. 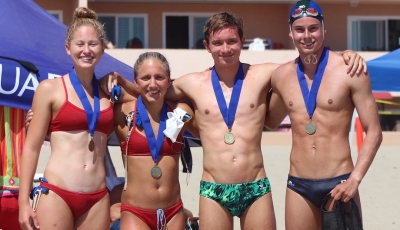 The overall men’s champion was Hayden Hemmens of Newport Beach with 144.500 points. James Bray of California State Lifeguard Association was second and Porter Hogan of Laguna Beach came in third.

The B Division was won by Laguna Beach, followed by County of Orange, Port Hueneme and Carpinteria. Santa Barbara County-Campus Point placed seventh. 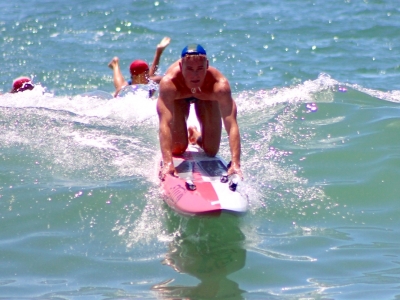 Zane Booth rides a wave into shore to take first place in the U19 Board Race. (Debbie Shaw photo)

AthleteS of the week