For three days, all things science, space, creativity, art and film absorbed the attention of several hundred attendees at the fourth annual Raw Science Film Festival. It was the first year that the festival was held in Santa Barbara.

The weekend-long event held Jan. 5-7 started Friday with an opening night VIP reception at the University Club in downtown Santa Barbara, bringing together festival organizers, sponsors, scientists, students and attendees from all over the world.

The low-key patio reception was the perfect setting to welcome team captain Fatemah Qaderyan and the other members of the Afghan Girls Robotics Team, which traveled from Kabul to accept an award, as well as learning and networking with scientists and other robotics teams.

The Saturday film festival presented film screenings on science and technology, talks and outdoor exhibitions throughout the day at the Lobero Theatre. Raw Science TV founder and CEO Keri Kukral, along with festival co-producers Will Nix and Michelle McIntosh, opened the festival and announced the lineup of 17 short films and movies for the next seven hours.

“The mission of the festival is to ensure fact-based scientific experts stay at the forefront of popular culture,” Kukral said. “The festival brings science fiction to life during an inspiring weekend of fun, entertainment and public service.”

As a bioengineer and former ballet dancer, she is interested in the intersection of science and media. Kukral earned a degree in bio/electrical engineering from Purdue University and has worked in research and development with a focus on medical devices at Abbott Laboratories, EV3 Neurovascular and ViaCyte.

She started the Raw Science TV channel by winning an entrepreneurial pitch competition through Caltech and IdeaLab. Kukral created the Raw Science Foundation to promote STEAM education globally through access to energy and connectivity, particularly for girls and women.

Later that evening, a black-tie red-carpet awards ceremony was held that bestowed awards to a dozen filmmakers in the categories of fiction and nonfiction and to both students and professionals. For the second year, Paul Hynek, president of EZ Numbers, emceed the awards ceremony. 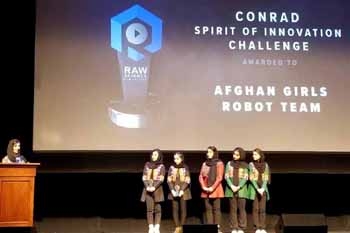 The award presentations were interspersed with expert speakers on interstellar travel, human longevity, scalable health care, the ethics of space travel and the Afghan robotics team.

On Sunday, a series of workshops, with experts from the Hollywood and scientific communities, was held at the Santa Barbara Museum of Natural History. The purpose of the workshops was to bridge scientific and educational art/media fields to engage global communities in science communication.

Participants included film producer Lynda Obst (Interstellar, Contact), writer/producer Jon Spaihts (Promethus, Dr. Strange, Passengers), Nancy Conrad of the Conrad Foundation, as well as theology professor Michael Waltemathe from Ruhr-University in Bochum, Germany, who discussed the ethics and sociology of interstellar exploration as well as the settlement of the moon and Mars.

UCSB physics professor and festival speaker Phillip Lubin told Noozhawk: “This festival created a wonderful opportunity for cross-fertilization between filmmakers, scientists and the public, stoking the imaginations of all who participated.”

— Noozhawk contributing writer Rochelle Rose can be reached at rrose@noozhawk.com. Follow Noozhawk on Twitter: @noozhawk, @NoozhawkSociety, @NoozhawkNews and @NoozhawkBiz. Become a fan of Noozhawk on Facebook.